LG's 3D compatible televisions for 2012 will receive the impressive Magic Remote or otherwise called magic wand remote controller. We really enjoy this remote control as it speeds up browsing and Apps considerably by allowing the user to point and click rather than having to use a 5-way controller to access choices online or Apps functions. The on-screen cursor actually follows your hand movements by "reading" the magic remotes motion. It's surprisingly accurate. On-screen keyboard typing, for instance is much faster using this device. Now LG has added voice recognition to the already impressive remote which allows users to text type using voice commands as well. While this may not speed up actual utility, it's always nice to have more flexibility with your remote control. 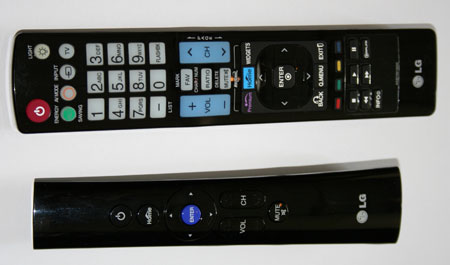 Another improvement over last year is the addition of the 3D button on the remote control. This allows users to issue a command to the TV with one press of a button to change the TVs current 2 dimensional programming to 3D by way of the built in 2D to 3D conversion technology. While reviews are mixed on whether 2D to 3D conversion is actually worthy as an extra feature, this feature on the remote will at least make it easier to check it out with different programs to see if it's something that appeals to you. Of course, the user needs to also put on a pair of passive 3D glasses to see the effect.