The Sharp LC-65D93U replaced the Sharp LC-65D90U as the current model in the late spring of 2007. It remains the largest available LCD television on the market.

Sharp is as cutting edge as manufacturer's come in the video flat panel (especially LCD) world. They focus attention on LCD products and improving particular (weakness) aspects of LCD products such as response rate time, black levels, and viewing angle and the end products show it. Samsung, Sony, and LG are all LCD competitors as well as some burgeoning 2nd tier manufacturers. Sharp is working on the introduction of the worlds largest LCD at 108".

The LC-65D93U that we tested was manufactured in Japan.

Using a Sencore color generator and analyzer we first calibrated the Sharp LCD to D6765K. This was the closest we could get to the optimum D6500K without entering the service menu. This is not an excellent result and will appear slightly pink until the viewer gets used to it.

First press the menu button and scroll to the Advance settings. Adjust the color temp to the low setting (reddish white). Next, turn the OPC feature off. Then, back in the normal picture menu change the LCDs settings as follows:

The first input signal I tested with this magnificent LCD TV was a lowly 480p signal from a simple old Sony DVD player. After all, most DVDs are not available on Blu Ray or HD DVD right now. There was much apparent graininess and dithering artifacts while viewing the matted version of Risky Business. From under 10 feet the 65" LCD struggled to smoothly up convert to it's native 1080p resolution. Extending the viewing distance to 15 feet helped a lot to diminish the appearance of motion artifacts but they were still visible. We also noticed loss of detail in shadow areas. Blacks, while deep seem over saturated. Strong points were viewing angle, little to no glare, and deep black levels. 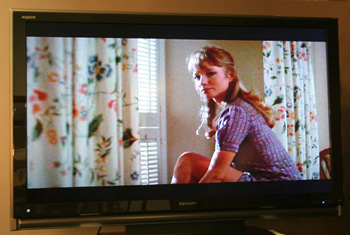 Next we tried a 720p/1080i/1080p signal through a Blu Ray player. The picture on all three of these resolutions was very crisp, but slightly different as we viewed different scenes from the 1080p version of Black Hawk Down. There was still very slight graininess with a 1080i signal but the color information appeared more realistic and pleasing to the viewers. With 1080p there was no graininess and motion artifacts but colors seem over saturated and less realistic. In a blind guess test, when toggling back and forth between 720p/1080i/1080p, the 3 reviewers were unable to consistently discern the difference between the three signals - even preferring the 1080i signal much of the time. I know, I know, this is not supposed to be the case - especially with a 65" LCD TV!! But nevertheless it is the truth.

Despite Sharp's claimed 4-millisecond response rate time, one problem that remained with all signals was motion lag. This could be due to the 60hz refresh rate that this Sharp LCD TV has (some manufacturers are now producing units with 120hz). Color information appeared over saturated on the whole, but there is a lot of it! 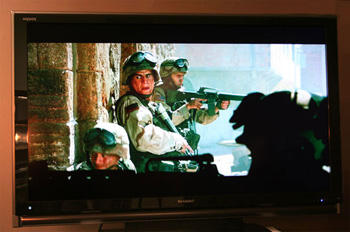 The styling of this LCD television is very attractive. The gloss black is appealing but not overbearing. The thin strip speaker is on the bottom of the unit and nearly invisible.

But while we are mentioning audio function, where is the volume? The dual 15W speakers, while having excellent definition and special effects, do not deliver enough of it! Especially not considering that this LCD TV is likely going in a large room.

Power consumption with this behemoth is an impressive 475W, almost half a 65" plasma. Longevity of the backlight is listed at 60,000 at standard position.

The backlit remote control is limited to 5 devices for universal use. There is a full array of input options including 3 HDMI inputs and a DVI input. It's especially nice to have the DVI input for computer use. Overall, the menu and remote are easy to use. The one glitch I found is that one must scroll through the inputs to find the "hot" signal. There is no discrete input selection on the remote control which can be a little annoying.

In summary, the Sharp LC-65D93U produces very strong, but over saturated blacks which causes loss of shadow detail. Colors are also brilliant but slightly over saturated. With HD resolution signals the picture is brilliant, but with a normal ole 480p DVD not so great, especially from 12 feet and in. The further you are away, the more you will enjoy the picture with a mediocre signal. Sharp is still about the best game in town for a 65" LCD TV. The real competition for this unit is a plasma TV of the same size and same price. I would have to give the picture nod to a Tier 1 65" plasma (if there is one available) over this 65" LCD. The motion lag still bothers me, though the TV will show an HD signal with fine crisp detail. Excellent attributes are no glare from the screen, a much improved viewing angle, and deep black levels.