First off, know that LG's Smart TV menu and load times are some of the fastest along with Panasonic, but is still slow. The menu when clicking on the Home option on the remote brings up a very thorough menu of options for Internet use, quick selections for some of the premium Apps, as well as a selection for Web Browsing. I found loading options to be a little on the slow side, but not as bad as some other manufacturers offerings. The Internet browser option is very easy to use with the full keyboard and fast control through the Magic Remote. One problem we ran across consistently with streaming content was a lack of processing power from the TV with streaming content, and even more with 3D content (where more processing is required). The signal buffers and sputters constantly. This was not the case last year when I tested 3D world Apps. When we viewed some You Tube videos as a final test and it buffered for a while when loading, then played it OK. But when we switched the resolution even to just 480p the buffering delay resumed. With the amount of content available for streaming out there now, this could be very troubling to some.

This is a feature within LG Smart TVs that enables the TV to remember and list all the various Apps you have downloaded and viewed on one convenient page. There is also a dedicated button on the remote to access it quickly. It's a feature that makes the Apps you use most more convenient.

Following are our impressions about many of the various mostly non-premium Apps in the LG Smart TV suite to give you some idea about quality. 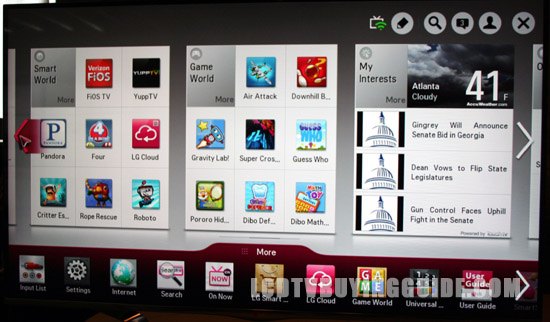 Getting the Magic Remote Control going is very easy. Give it a quick shake gets the cursor to appear, the arrow pops up immediately if you have a hot signal going into the TV. We have always liked the point and click operation of the Magic remote and still do. It speeds section and browsing considerably. But now this voice control feature has trumped everything before it. It is amazingly accurate. Just press the mic button and speak. We tested the TV browser (Bing) with our favorite difficult site url, “LCD TV Buying Guide” and the 55LA7400 had no problem, pulling up our site #1. The voice recognition technology is fantastic. Drawbacks to the remote are no Input or Aspect ration keys even though there is a quick menu key that accesses the Input icon.

LG's Magic Remote speeds Apps selection and particularly browsing. We like it, but the new design still needs an input button

LG is using its own proprietary platform for its Internet TV solution, LG SmartTV. LG Smart TV users have access to many channels, as well as access to the Internet and material like videos, photos, and music available on their home network Plex, the developers for Apple's software systems is also the maker of the LG solution, and, as you can imagine, LG SmartTV is fast, intuitive and beautifully displayed.

LG Smart TV's user interface (UI) is organized into four sections – TV Live, Premium Content, TV Apps and a Launch Bar. Users have access to major channels on LG SmartTV including, Vudu, Netflix, YouTube, CinemaNow, Hulu Plus, Amazon Video on Demand and Live Streaming Sports from channels such as MLB.tv, NBA GameTime and others. Several sections can be displayed at once on the tv, so for instance, you can watch a home video while scrolling to find a movie to watch on a different app. Content is expanded with LG's Smart Share function which allows users to wirelessly stream content from their computers and other compatible devices for viewing on their HDTV.

LG is among only a few major HDTV manufacturers to also offer an Internet browser with its Internet TV offering. Because Plex is behind the software for LG SmartTV, we suppose the browser is a take off of the Apple Safari browser, although this is unconfirmed. Applications are also growing rapidly on the Smart TV system, since the platform is open to developers. We noted several interesting gaming options among the menu selection we tested. 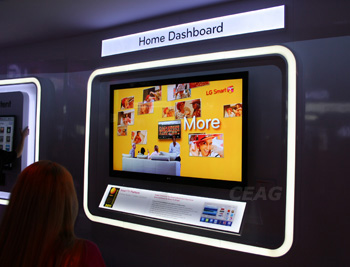 Another appealing feature of LG Smart TV is its remote, called the LG Magic Motion Remote, letting users point at the screen and move a cursor on the screen much like a wireless mouse. LG also thought through the need for a keyboard and has an app available for both iPhone and Android smartphones. The LG Magic Motion Remote comes standard with the LG PZ750 and PZ950 models and may be purchased separately for use with other LG SmartTV models.

For consumers who want access to the LG Smart TV technology on an older television with an HDMI input, the LG SmartTV Ugrader can replicate all of the channels and capabilities.