Sony's “Partner Services” within the newly named Sony Entertainment Network includes your standard premium Apps providers such as Netflix, Hulu Plus, YouTube, NPR, Pandora, Amazon Video on Demand, Wired, Yahoo! Finance, News and Weather, facebook, twitter, Slacker, Picasa, Flickr and Sony's own movie and video service which was called Qriocity and is now called Sony Music Unlimited and Sony Video Unlimited. These two offer pretty much the same services – movies and music that you would find in the other premium services partners listed above. The reason for them is a bit of a mystery. I suppose Sony feels that they can get a little better content than others – which may be true in the movie category but my real thought is that they are just trying to get a bigger piece of the Internet TV pie that purchasers of their TVs will utilize. The company has dropped the Bravia Internet Video moniker in favor of Sony Entertainment Network. Here's a run-down of our recent experience with it and how it works:

We had some frustration when accessing the Apps. You actually have to access the Internet Apps through the Home Menu button then scroll to the Internet Options. Pressing the Internet Apps button only brought up the Yahoo! Weather Widget. Or you can use the SEN button on the remote for a more direct access to the Sony Video and Music Apps. As far as speed, keep your expectations low. Some load slowly and response time when turning on the TV is generally slow as well. Here is a run-down of a few Apps that we rated:

Apps are somewhat slow loading. When I tried to load the NHL Vault App, the menu prompts me to go online from a computer to register for the service. 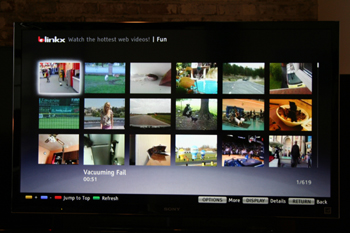 A shot of blinkx App on a Sony TV. A relatively poor App. But free.

A word about Sony's Internet Browser for this year. It's not actually an Internet-wide portal but a browser that only searches Sony's information network such as the Sony Style Store. It's terribly slow to use and basically worthless. 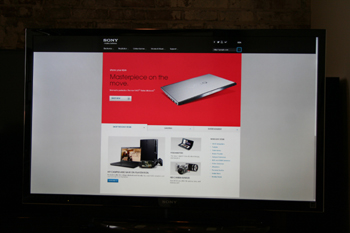 A search on Sony's browser turns up some Sony products

The following is commentary on Sony's Bravia Internet Widgets from last year:

A subset of BRAVIA Internet Video is the BRAVIA Internet Widgets, which are information screens for news, sports scores, social media updates and more that appear directly on the Sony BRAVIA HDTV series. Users can customize the widgets to show, for instance, local weather reports.

The Sony Qriocity platform gives users direct access to the latest movie releases and select favorites from every major movie studio. Once signed up to the Qriocity service, users can enjoy watching material from any Sony device. Given Sony's history of devices like the Walkman, it's no surprise that Sony has plans to add music to their Qriocity lineup. Users can upload their own personal music library, have access to millions more songs through any Sony device and hear new music based on their listening history. Music videos on demand will be another important component of the Qriocity offering.