Building a state of the art home theater doesn’t have to take a lot of skull sweat if you know where to look. 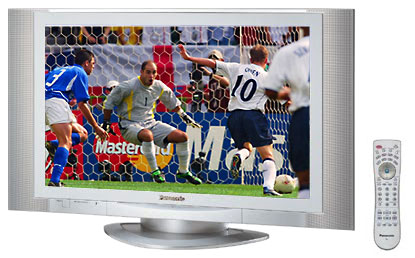 And if you want to create one that’s a real showcase, looking as good as it performs, Panasonic is hoping you’ll cast a glance in its direction.

I did that recently, asking them for a couple of examples of their latest wares and they indulged me with an incredibly slim direct view LCD television and a home audio system that looks like it could compete in a design contest.

The TV was the TC-32H1, an HDTV-ready 32 inch 16x9 set that, while I still don’t think LCD is quite there yet, shows the amazing distance that the technology has come. After all, it wasn’t too many years ago that the only time you saw an LCD (liquid crystal display) was on a wristwatch. Now, even though I ran the unit side by side with an HDTV CRT (the “old fashioned type of TV) rear projector and it didn't match up, I was tempted to tell Panasonic that burglars had taken it and they’d have to forget it ever existed.

But alas, Panasonic isn’t that stupid or gullible…

Anyway, the TV-32LH1 is a slim and handsome unit that’s compatible with regular television, DVD’s (progressive scan and interlaced) and 1080i HDTV. The latter is a terrific idea, but it also made me wonder. After all, the LCD’s specifications say it displays 1280 x 720, which means it won’t put out the 1080i picture at a true 1080i (NOTE: most HD-ready TV’s to date don’t either). It does mean, however, that it should work fine for displaying a true 720p, except that it doesn’t handle that format at all – it doesn’t even dumb it down to 480p the way our reference set does. It just goes black.

Now, if you’re going to support one HDTV format, 1080i is the one I’d choose, so Panasonic made the right decision; it’s just strange that they eschewed the opportunity to offer both.

Then again, that would probably add to the price of the TV, and it’s already pretty dear all things considered. It lists for about $4500US ($6600 Cdn), which prices it above most comparable CRT or plasma sets.

On the other hand, LCD does offer a couple of advantages over those other formats. For one thing, you can display 16x9 or 4x3 pictures without having to worry about burn in, so you don’t have to stretch and/or zoom a 4x3 picture to fill the 16x9 aspect ratio screen lest it burn in the black bars on the side.

That’s a terrific advantage. Panasonic also says that LCD technology works better than plasma for “personal TV applications” (the kitchen, office, or bedroom, etc.), because it offers better brightness in a bright room and consumes less power. It also has terrific “off axis” performance, so the picture doesn’t drop off as severely as it does with a CRT projector if you sit off to the side.

Then there’s the weight. The TV-32LH1 weighs less than sixty pounds, and its slim design makes it easy to pick up and move around if you have to.

Those are good selling points. Unfortunately, the tradeoff is in price and contrast. While this TV looks terrific overall, its contrast ratio isn’t up to the standards of CRT or plasma. You can really notice this after you’ve been watching it for a while, especially in a darkened room. LCD’s are also supposed to suffer from picture lag, but we didn’t notice that this was a problem during our time with it.

We tried a variety of video sources with the TV, from 1080i to DVD in both progressive and interlaced variations. We liked it a lot, though when push comes to shove our general consensus was “Wow, have these things ever come a long way – but they aren’t quite there yet.”

That’s so far as putting it in our main home theater is concerned. On the other hand, it also isn’t big enough for our main home theater, where we’ve been spoiled by a 57 inch TV that we think is only marginally large enough. But it would sure look and perform sweetly in our living room, where the bright daytime light makes the RPTV virtually useless (assuming we’d want to carry it up there anyway!). It would also be a terrific bedroom TV, though if we could afford that for our bedroom we’d probably be retired now.

In our use tests, we noticed some small bright areas at top right and left of the screen; not a big deal and we really had to look for them, but they were there. Also, thanks to the contrast issues inherent with LCD, black areas tended to disappear into a big black mass, with little nuance or texturing to them. Color was excellent, though.

One thing we noticed, and this is a problem with many TV’s regardless of their “persuasion” (not necessarily LCD), was that the television was set far too bright when I took it out of box. This is normal; TV’s seem to be set up to be seen in a brightly lit store, not a more intimately lit home theater. So we hauled out the Digital Video Essentials disc and ran through its excellent tests, discovering that most parameters other than color (picture, black level etc.) had to be backed off nearly to their bottom ends to give the best picture. Later, in everyday use, I ended up rejigging it again, turning down the brightness and leaving the picture at its default. In the end, I fiddled with the picture while watching Star Wars Episode II and that brought about the most satisfying results.

The 32LH1 looks spectacular when the colors on screen are really bright (such as bright daylight scenes, etc.) but it falls down at bit with night scenes and overall dark stuff.

Anyway, the TV-32LH1 comes with about all the I/O’s you could want, starting with a 181-Channel NTSC Tuner that’ll help you make the transition to HDTV. Direct video inputs include the new HDMI audio/video interface, and two each of the regular A/V jacks, S-Video and component video. There’s also a headphone jack.

Speaking of audio, this set puts out pretty good sound, though in our experience we could care less about what type of audio is built into a TV when the only time we use the internal speakers is when we’re watching stuff where the sound isn’t important – such as “Jeopardy!” or other TV fare. When it comes to a program where we care about the sound, we fire up the surround sound audio system and use that.

The bottom line with this excellent LCD is that we really liked it, and would love to build a secondary home theater around it, but it doesn’t make us want to take a sledgehammer to our 57” RPTV yet. But that isn’t really a fair comparison, more like apples to oranges. For an LCD TV, this one is first rate.

We were fortunate enough to be able to couple it to Panasonic’s SC-ST1 audio system. This $999US ($3300Cdn, which seems outrageous compared with the US price) system is “B&O-like” featuring four graceful-looking speakers on stands for the corner channels and another graceful main unit that contains the receiver and DVD player. You also get a subwoofer unit that includes the amplifiers and that’s also where everything else (including the power supply) hooks in and out.

The system looks terrific in the room and doesn’t take up a lot of space. You’re limited in where you can set the stuff up by the lengths of the typically dinky speaker wires that are included, but of course you can always get your own cables. You’ll pretty well be limited to thin and cheap cables, though, since the speaker connectors are those little spring loaded things that are so common on mainstream equipment.

Setting the system up is pretty easy. The speaker towers come in two pieces, a base and the speaker itself, and you can run the speaker wire into the base and then up to the speakers on the inside, which makes for a nice neat look. There’s one big multifunction cable that runs from the receiver unit to the subwoofer, and it was plenty long enough for both of the locations in which we tried it.

The center channel looks like the main speakers, but lays horizontally as it should.

The system claims a total power of 500 watts, which is plenty for most rooms, and it’s flexible enough to handle all of these formats: DVD-Audio, DVD-Video, DVD-RAM/R, VCD, CD, CD-R/RW, MP3, and WMA. We were delighted to see it accept DVD-Audio discs and it did a nice job of them.

One thing that really bugged me, though there’s no real way around it considering the vertical design of the system, is the way you have to insert discs. The “tray” swings outward from the bottom and you have to slide the disc in carefully in a way that seems to beg fingermarks on the disc. Not a big deal, of course.

Not only does the system handle all those abovementioned disc formats, it also comes equipped to transmit Dolby Pro Logic, Dolby Digital and dts Decoders , 2 & 6 Channel DVD-Audio, and custom sound modes. It also has built in sound field controls such as heavy, live, clear, soft, disco, etc.).

As for video, the system plays 480i and 480p and outputs include composite, component and S-Video. We used the component video connections to the LCD TV and it worked just fine.

Other features include a “Monitor Select” which supposedly tunes the system to the type of TV monitor you’re using. There’s also a variable zoom feature and a universal remote.

The remote, as is so often the case, is the weakest link. It’s easy enough to figure out, but (though it could have been operator error) I had trouble getting either the audio system’s or the LCD TV’s remotes to work both units; they seemed to fight each other. And the labels and buttons are very small, for people like me who require reading glasses.

I also had difficulty with the on screen menu system, which wasn’t nearly as intuitive as I’d have liked. It was no worse than many other components I’ve reviewed, though. This is a sore area with me in general…

Audio quality is good, with excellent channel separation. I liked it a lot when playing music, though in our second set up (In a rather live room, unfortunately, and this could have colored the result) it seemed a little thin yet boomy when I played Star Wars Episode II.

The soundstage is nice and wide, especially with DVD-Audio, and the fact that all four main speakers are identical in size and height was wonderful. In that respect, it was better than in our reference home theater, which has better quality surround speakers, but hanging from the ceiling – fine for movies, but with surround sound DVD-Audio discs it can tend to make the rear channel info sound more like a heavenly choir than an integral part of the music.

This audio system is a nice match for the LCD TV (and dare I say for many others) because not only does it offer decent sound, but its cosmetics blend in nicely with the slim lines of the TV. In our tests, they made a nice combination.