We receive numerous inquiries about this complicated topic.

First of all, is motion lag a problem in LCD TVs?

Yes, though many manufacturers are addressing the problem and getting better.

What is motion lag?

Motion lag in LCDs is the slight trailing sensation that is visible when fast motion scenes are displayed on an LCD. It seems that the picture is unable to catch up to the original source. Another example of this phenomenon may be seen when the viewing scene is panning side to side in either direction and is especially noticeable in scenes using the "Shaky Camera Effect" popularized in movies such as Saving Private Ryan.

Why is motion lag an issue with LCD and not with Plasma technology?

LCD technology relies on twisting nematic crystals to generate its color and light throughput information. The speed of these twisting crystals may not be fast enough at times of fast motion display or particularly side to side panning of fast motion display. Nematic refers to the arrangement of long axes of liquid crystal molecules forming parallel lines. Plasma technology does not rely on twisting crystals but rather each individual pixel carries its own light and color information by way of red, green and blue phosphors. CRT tube TVs also worked in a similar way and did not have a motion lag problem. Phosphor based color production also creates the somewhat more realistic color information that plasma TVs enjoy. 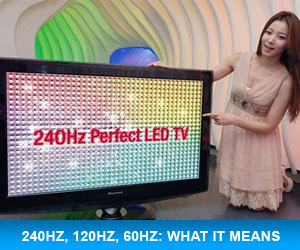 Are some LCD Televisions better than others at reducing motion lag?

Yes, definitely. Some top tier manufacturers have reduced motion lag considerable by reducing the millisecond response rate time. One way they accomplish this is through creating a faster refresh rate (frame rate conversion). Currently 240hz is the fastest refresh rate while many lower tier manufacturers still have a 60hz refresh rate. I have not yet experienced an LCD TV that has no motion lag, but some brands are very good at eliminating it.

What is the detrimental effect of Motion Lag/Trailer Effect?

Motion lag is just an annoyance with some viewers. Some people are more susceptible to its effects. It can cause headaches in some people, but not in others when watching the same TV. Generally, it can detract from viewing pleasure.