First off, KUDOS to Hitachi for bringing a 1.5" television to the marketplace! There were many superthin LCD and Plasma televisions on display at CES 2008, but Hitachi is the first manufacturer to deliver on the promise. This is the first ever review of one of these super thin LCDs and we were glad to have first crack. Certainly, there was a lot of engineering that went into producing this TV. Some of the engineering challenges were overcome while others may have proved daunting. For instance, there is only one HDMI input included as the sole input port for video sources. Other challenges were apparent with audio output capability, and some input source sync issues. On the flip side, Hitachi has managed to produce this unit with a high quality LCD panel with good viewing angles, excellent video processing.

Calibration: Picture is preset to the Dynamic Picture Mode presenting over-hyped color information right out of the box.

First, change the Picture Mode to the Natural setting. Then follow these settings to bring the picture to within +/- 275 of D6500K.

Benchmark Picture Testing: We derived mixed result from this LCD on benchmark tests. During the Video Resolution Loss test the LCD performed well with one vertical box shimmying. The TV also did a very good job during diagonal filter testing showing very little stair stepping effect even around the horizontal axis. And it was exceptionally competent in HD noise testing with little to no background noise. However, film resolution loss testing revealed dithering motion in boxes 1,2, and 5 or 60% of available test material in both horizontal and vertical test patterns. This weakness was also revealed in the recent Blu Ray release of Benchwarmers – as the ballpark fence in the background flashed with a strobing effect. 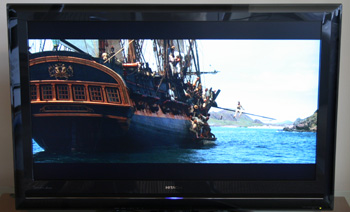 HD sources on the UT37X902 appeared crisp and clean

720p/1080i/1080p High Definition Picture Quality: HD sources on the UT37X902 appeared crisp and clean as the internal processing of the LCD got out of the way of high end source signals. Color information was plenty vibrant but leaned too much to yellow/green tones – causing problems with flesh tones reproduction. Blues also took on an unnatural violet tone at times. Dark matter detailing was muddy at times as blacks become oversaturated and the backlight seems to have a hard time producing subtle light conditions – especially from film sources. There were sync issues with this LCD. At times the Hitachi would not display an image from or test sources – displaying the message NO SYNC. This issue was overcome by turning off both the monitor and the input source then turning on the monitor first, then the input source. It's a quirk worth mentioning and might cause the user some annoyance. 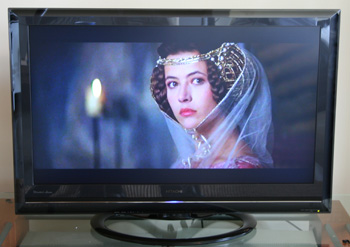 Up conversion/Video Processing from 480i and 480p: There was more background grain present with 480i source signals, but the video processing up-conversion appears excellent. Images were smoothed and clean. Color information is much more muted in 480i so make sure to change your picture settings as recommended above as this will dramatically impact the color and brightness. There is an advanced color temperature adjustment available with standard definition signals. We felt flesh tone color information was much more accurate and lost the jaundiced effect that it displayed with 1080i signals.

Black Level/Contrast: This LCD uses an EEFL backlight (External Electrode Flourescent Lamp) which allows for the ultrathin design of the LCD. We felt the black levels were not deep enough and bled to other areas of the images too easily. Contrast appeared to have very limited range. Though Hitachi does not publish a native contrast ratio we would estimate it at around 1800:1. We noted some light bleed from the backlight in varying quadrants depending on the appearing color information.

Dark Shadow Detail: We felt the dark shadow detail suffered via the somewhat hazy blacks, which tended to bleed into darker images. During dark below deck scenes in Master and Commander there were obvious deficiencies in the ability of the UT37X902 to produce refined dark color gradations.

Color Rendition/Color Accuracy: Color accuracy varies widely depending upon the input signal and the calibration setting. We must criticize the LCDs menu capability limiting color temperature advanced controls to only standard definition signals. This constraint left us with slightly washed out/yellowing flesh tones with HD signal sources. Overall we felt there was a greenish/yellow tint to the picture post calibration with 1080i and 1080p sources.

Viewing Angle/Off Axis Viewing: Hitachi has used a very high quality LCD panel in the UT37X902. The LCD has an unusually wide viewing angle for an LCD of around 80 degrees without significant contrast degradation.

Motion Lag: There was some smearing present in a couple of instances, but overall the performance was very good for an LCD TV.

False Contouring/ Mapping: During the Stadium Seating test in the HQV Benchmark Test we did not note any banding or mapping present in the UT37X902.

Screen Glare: For an LCD, we felt there was considerable reflective glare from the screen from varying angles.

Exceptions: The UT37X902 is soundless and emits very little heat. There are extended instructions in the manual about wall mounting the unit. This is a fragile TV, and needs careful attention. For example, though the TV is thin, it still needs to mount at least .8 of an inch away from the wall so that the TV can breath properly from its back vent plates. Read below in Inputs, Aesthetics, and Audio for other standout exceptions.

Aspect Ratio Sizing Considerations: This Hitachi LCD has a robust 6 aspect ratio adjustments when watching standard definition programming, and 3 adjustments when viewing HD sources. We found the sizing algorithms to be solid and straightforward. The Panoramic 1 aspect ratio option was especially adept at resizing 4:3 images to full screen size. These adjustments are made with the aptly named Aspect button on the remote control.

Inputs: Obviously in their haste to release the first 1.5" deep TV, Hitachi left a few areas to suffer. We had major problem issues with the inputs on this little LCD. There is only 1 HDMI input and one RGB 15 pin computer port available. Hmm, not much choice. So the user can effectively connect one HD source component and that's it. Of course there is the option of using an audio receiver or switching device (such as VRBO or Extron) component to toggle between HD sources. The HDMI and Power supply connection cavities are housed on the back of the UT37X902 and are awkward to use. The HDMI connection can cause the cable to bend at a severe angle. This is when you wish HDMI connections were locking and not so flimsy. There is a supplied clamp on the LCD just below the head of the HDMI terminal which should help.

Aesthetic Considerations: Ah well, this is the fun part isn't it. This must be the regard that Hitachi is most counting on with the UT37X902. 1.5" is a colossal leap forward for TV display technology. The LCD is attractive all the way around with a just transparent smoke plastic outer pane connected to the gloss black bezel. The thin strip speaker just below the viewable screen is tidy, but begs a question about output quality and volume (see audio comments below). The oval shaped base of the LCD is neat as well, leaving a small footprint and a height of about 2.25" off the table.

The remote contains plenty of easy to use commands.

Remote Control: The UT37X902 has an included back lit remote control. The arrow buttons and menu buttons are too close together and this causes problems with finger stumbling ease of adjustment at times. Button placement is cumbersome, but the remote contains plenty of easy to use commands. One interesting note is an Input button as well as both RGB and HDMI buttons. Since there are only RGB input or HDMI input on this LCD, you can easily just toggle back and forth using the Input control button. The dedicated RGB and HDMI buttons are overkill.

Menu functionality: This Hitachi TV has a decent selection of menu functions. Color temperature advanced adjustment is only available for standard definition signals. With HD signals this left us with the above mentioned washed out slighly yellowing flesh tones even on the Warm picture mode setting. Of course, there is no need for discreet picture adjustment settings (per input) since there is only one video input. There are some newer picture setting functions available such as 3D color management, black enhancement, and DNR (digital noise reduction).

Audio Output: The UT37X902 Hitachi has questionable audio capabilities. Viewing Master and Commander we could not make out low dialog in some of the below deck cabin scenes between Captain Jack Aubrey and Dr. Maturin. The Hitachi does not boost the center channel speaker output when displaying 5.1 material (as it should). The defect was so serious that we could not hear quiet scene dialog unless the volume was pressed to maximum (60). As a result, action scenes during the movie were too loud and we had to continually turn the volume up and down on the LCD – not a desirable result. Audio quality is normally enhanced with HDMI connection. This did not help the Hitachi LCD. Lastly, top volume from the units 6W X 6W thin strip speakers was not sufficient for a normal sized room.

Priced at a staggering $2700 at your local retailer, the UT37X902 is no inexpensive display. A quality 1080p 37" LCD TV from Sharp or Samsung may retail for around $1200 to $1300 as of this writing. That's a steep premium to procure the thinnest (if not sexiest) TV on the block – especially with the LCDs other drawbacks.