Below is a current list of Sony Bravia models available in the 55" sizes. This list of models contains Bravia LCD, LED and 3D televisions. Many of the models listed have been reviewed by our editors and scored in the categories of picture quality, available features and value. If the television has not had a full review, you will find editor commentary about the avilable features on the TV. Specifications for the TVs and comparison shopping are also available. 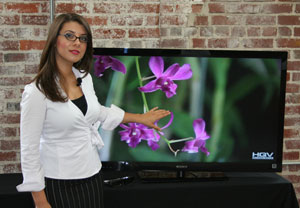 This is one of Sony's top end TVs for 2012 and has the unique OptiContrast panel which is Sony's way of telling you that contrast is very high – that is deep, saturated blacks and very bright white and lights.

The 55HX750 series from Sony actually uses a matte-type screen finish rather than the Gorilla Glass Opticontrast panel on the HX850 and XBR929.

Sony 55" KDL55NX720
The 55 inch KDL55NX720 also has Sony's Gorilla Glass in its outer LCD panel. While not the top end Sony model it does have 480Hz refresh rate. We did note a little blurring from this model in fast motion scenes and some jerky judder motion artifacts. However, it is a good value all the way around.

Sony KDL55EX720
The new EX720 series is a replacement for the EX710 series with a new 1080p, LED edge lit panel and expanded internet features, it is available in 4 sizes from 55" down to 32". See the full review and video review of the EX720 Series

Sony KDL55EX620
2011's replacement for the EX600 series is the EX620, we liked all the EX series TVs we reviewed last year and the EX620 continues on the quality EX line. See the full review and video review of the EX620 Series

Sony Bravia XBR-52HX900
The XBR-HX900 series from Sony is another 3D ready LED backlit LCD on display at CES, however the HX900 features local dimming LED backlighting that allows for better control of the backlight to give better contrst in dark scenes and full brightness in bright scenes.

Sony Bravia KDL-55EX500
The EX500 series from Sony is a step up from the entry level EX400 series. It retains last year's Bravia Engine 2 processor as opposed to the new Bravia Engine 3 processor in the upper tier Sony LCDs.