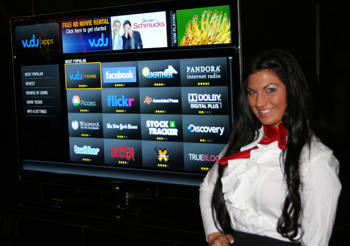 The engineers, designers and marketers at Sharp are heavily focusing their expertise to introduce radical advancements in HDTVs. Sharp was among the first TV manufacturers to offer Internet access in its HDTV sets. The approach Sharp is taking on its Internet TV solution is still evolving.

The Sharp Aquos Net Internet TV solution uses a proprietary system to give users access to a host of widgets. AQUOS Net is a highly responsive system, with the fastest widget installation we’ve seen, yet the UI (user interface) is more basic than others we reviewed.

AQUOS Nets presents widgets installed as a layer on top of the programming users are watching and include: MSNBC, Nasdaq, Access Hollywood, MSNBC Sports, Rallypoint, Weatherbug, GoComics, Screen Dreams and Funspot for games like Blackjack and Suduko. Google’s Picasa widget lets user view their online photo galleries and those of their friends. Unique to Sharp’s Internet tv option is Navteq traffic, a widget that shows traffic patterns on amap in red, yellow and green labeling, which for urbanites is definitely an interesting tool. The AQUOS Net apps platform is adding new widgets rapidly, although Sharp does not have the breadth that users can find with other HDTVs.

Most importantly, AQUOS Net now offers Netflix movie streaming and plans are on to add Vudu in the channel lineup shortly. For HDTV owners who are less tech savvy, Sharp AQUOS Net has a unique feature called Aquos Advantage Live. With a call into a live representative, a Sharp customer service representative can take control of and change settings on your TV, troubleshoot and make picture adjustments, for example.