[an error occurred while processing this directive] TV Screen Size Comparison - How Much Bigger is it Really? Comparing Viewable Area vs. Manufacturer Diagonal Area

TV Screen Size Comparison - How Much Bigger is it Really? 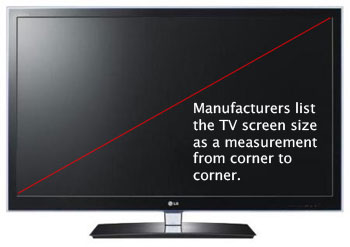 For as long as I can remember television manufacturers have given the screen measurement as a diagonal measured from one corner to another. There is nothing wrong with measuring televisions this way but it doesn't really make it apparent how much larger or smaller one TV is than another, especially when comparing older 4:3 aspect ratio television vs. the newer 16:9 standard.

How much Bigger is One Screen vs. Another?

Below I've compiled a chart of some common TV sizes compared to the next size up, so you can see the actual percentage increase in viewable size.