Below is a current list of Samsung TV models available in the 32" size. This list of models contains LCD, LED and 3D televisions. Some of the below models have been reviewed by our editors. Televisions are graded for picture quality, features and value then assigned an overall score. Models that are not reviewed will have commentary on the TV's features such as 3D capability, inputs, refresh rate, internet connectivity and more. For models available on the market there will be a price comparison window and specifications for the television will also be available. 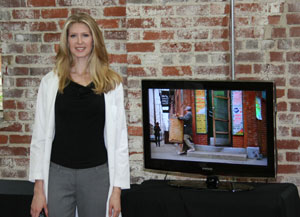 The 32ES5000 is Samsung's lowest end line in the larger size LED backlit LCD TVs for 2012. It still has very nice appearance with a thin black bezel frame and 2" depth.

This smaller size line of LED backlit LCD Televisions begins circulation in North America in March or April of 2012.

Price conscious shoppers will be all over this value oriented 46" model from Samsung. The UN32EH5300 will present picture quality value in a smaller size TV.

Samsung 32" UN32D6400
The 32" Samsung UN32D6400. We reviewed this TV in early summer 2011 but it will continue in production and availability until spring 2012. and can report a very good HD picture quality with exceptional black levels and light throuput to allow for a super bright and colorful picure. Our HD picture quality came in at a 9 out of 10 on our 10 point scale. Standard definition picture quality was less due to contrast decrease at side viewing angles and more odd effects from judder and the 240Hz Clear Motion feature, which is sometimes too powerful for its own good.

Samsung 32" UN32D6000
Samsung's UN32D6000 has quite the Internet feature selection. It's available until April 2012. As a 32 inch Samsung LCD TV with LED backlighting it has Smart Hub Internet features which are included on this model bring one of the most complete offerings in the TV business with just about all the major services you would want plus lots of little proprietary Apps choices that cost between free and $2.99. See the full review and video review of the UN32D6000

Samsung 32" UN32D5500
The 32" UN32D5500 line of LCD TV top panel LED backlit represents a smaller size but high price option considering its feature set. It may still be perfect for bedrooms or dorm rooms. It may not have all the features of the higher end models but if you want a slim line LED/LCD at a good price the D5500 is worth a look. It really depends upon how much you pay for a 32" TV like this as value is the key determinant. Usually people do not want to spend as much for a LED backlighting in a 32 inch TV as they would for a larger size. For this reason it's questionable whether or not this TV is a good seller in the market place. See the full review and video review of the UN32D5500

Samsung 32" UN32D4003
Samsung's UN32D4003 is a 32" LED backlit LCD TV and was a surprise for 2011 but will be for sale until May 2012. It is a surprise simply because it was not announced at CES and it is set up as a discount model LED TV. The brightness will be better on this TV than traditional CCFL backlighting and will certainly perform better in light rooms with lots of sunlight. It's questionable whether or not this TV will be the best value based on the price relative to other LCD TVs by Samsung. But check it out. You might be pleased with its features set.

Samsung 32" LN32D630
The 2011 Samsung D630 comes in the 32 inch size as well. It is a traditional CCFL backlit LCD TVs that include Samsung's new Allshare feature which allows streaming mdeia connection from your home network to the TV, there is featured as well built-in WiFi for easy access to your home network. We like this unit a lot in terms of value but it may be trumped by other traditional LCD TVs in price such as the D550 or D450. We were highly impressed with the 6 series ast year and expect this year to be the same.

Samsung 32" LN32D550
The 2011 D630 series are CCFL backlit LCD TVs that include Samsung's new Allshare feature that allows you to stream media from your home network to the TV, it also features built-in WiFi for easy access to your home network. We were highly impressed with the 6 series ast year and expect this year to be the same.

Samsung 32" LN32D450
The 720p, 60Hz D450 line replaces the C450 line from 2010. These small, affordable LCD TVs make for an excellent TV in the bedroom, office or kitchen. See our review for a full breakdown of the D450's performance and features. See the full review and video review of the LN32D450

Samsung 32" LN32C450
Samsung's 2010 4 Series LCDs are a step up from the 3 series. Available in the same sizes they still feature a 60Hz, 720p, CFL backlit panel, with SRS TruSurround HD. They add a third HDMI input and the ability to watch video off a USB thumb drive.