Below is a current list of Samsung TV models available in the 46" size. This list of models contains LCD, LED and 3D televisions. Some of the below models have been reviewed by our editors. Televisions are graded for picture quality, features and value then assigned an overall score. Models that are not reviewed will have commentary on the TV's features such as 3D capability, inputs, refresh rate, internet connectivity and more. For models available on the market there will be a price comparison window and specifications for the television will also be available. 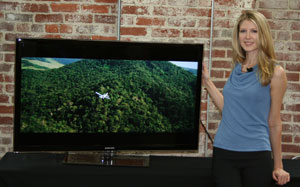 This is Samsung's top of the line for 2012, the 55 inch UN55ES8000. Tons of new features include a cool new remote which includes a QWERTY keyboard and Google's new TV search function.

The 46" UN46ES7500 has the excellent clear coat screen which is improved over last year in terms of side angle viewing quality and screen uniformity.

The UN46ES6580 includes 4 pair of 3D glasses and a Skype camera to add to the already impressive ES6500.

The UN55ES6500 has many of the best features Samsung will put out in 2012 while omitting some of the fancier ones like Smart Interaction by voice control. It's a super value model.

Black performance on the ES6100 is a strong point, blacks are dark and inky and show improvement over 2011 models, but again it's important to keep the backlight at the right setting.

The 46EH6000 has a very thin black bezel of .75" in width. Though this is not one of the more refined or flashy designs on the market it's a good looking set for the price point.

The UN46EH5000 is Samsung's lowest end line in the larger size LED backlit LCD TVs for 2012. It still has very nice appearance with a thin black bezel frame and 2" depth.

Price conscious shoppers will be all over this value oriented 46" model from Samsung. The UN46EH5300 will present picture quality value in a smaller size TV.

This 1080p traditional LCD TV will not win any innovation awards, but it is going for your basic market and will be sold as a budget, entry level TV at stores like Walmart and other discounters.

Samsung UN46D8000
Samsung's 8000 series 3D LED TVs return for 2011 with the D8000 series, a new slimmer look and expanded features over last years model. The Smart Hub Internet TV is a particular standout with access to many applications on the app store as well as streaming media and a full web browser.

Samsung UN46D7000
The D7000 is only a slight step step from the D8000 with a different look and most of the same features as the 8000 at less of a price. It does lack the web browser that's built into the 8000 but still has access to the App Store and many streaming content providers.

Samsung UN46D6400
The D6400 represents the entry level in Samsung 3D LED LCD TVs, don't let the entry level tag throw you, this TV is packed with many top of the line features such as Smart TV internet capability and built in WiFi.

Samsung UN46D6300
The 46" Samsung 46D6300 series has many of the same features of the D6000 series. This is a competitively priced TV without a few of the best features but still has ALLShare and streaming media services through that service. Value is one of the focus points of this TV. See the full review and video review of the UN46D6300

Samsung 46" UN46D6000
The 46 inch UN46D6000 LED backlit LCD TV has a great ultra clear coat screen and fine HD viewing characteristics. It will also bring some very good value to those that do not care about having 3D viewing capability. The 6000 line is considered an entry level LED television and provides good bang for the buck in the LED market. The TV has many extras in its 46" viewable area casing, however with a Clear Coat screen that helps absorb ambient room light. We've been big fans of clear coat screens lately over non-clear coat filters that show a lot more glare. Other extras include Samsung's Connect Share and AnyNet+ features. The TV is not 3D ready. See the full review and video review of the UN40D6000

Samsung 46" LN46D630
The 46 inch Samsung D630 model replaces the C630 from last year and has some stellar attributes for such a low priced TV. It is a CCFL backlit LCD TVs that includes the Samsung Allshare feature that allows you to stream media from your home network to the TV. It also features built-in WiFi for easy access to your home network. We were highly impressed with the 6 series ast year and expect this year to be the same. What surprised us about this screen was how good the picture quality was with varying signals and with very good depth perception. Side angle viewing wasn't too bad either.

Samsung 46" LN46D550
The 2011 D630 series are CCFL backlit LCD TVs that include Samsung's new Allshare feature that allows you to stream media from your home network to the TV, it also features built-in WiFi for easy access to your home network. We were highly impressed with the 6 series ast year and expect this year to be the same.