[an error occurred while processing this directive] Contrast Ratio: Are Manufacturer's Specs Important?

A few years ago there was widespread exuberance in the A/V consumer world when NEC or Panasonic announced that the newest version of their gas plasma display (that's what we called them then) delivered an astounding 3000 to 1 contrast ratio. Today manufacturers advertise contrast ratios approaching and above 1,000,000:1.

"The highest contrast I have measured on a recent flat panel display was nearing 1600:1."

Truth is that a 3000:1 contrast ratio would be almost unbelievable even today if evaluated on a post calibration, whole screen, ANSI checkerboard pattern basis. The highest I have measured on a recent flat panel display was nearing 1600:1.

For a long time, we in the A/V world have been harboring secrets about the testing methods used for such measurements as contrast. Contrast ratio stands out as probably the most blatant and ridiculous example of irrelevant manufacturers specifications.

Contrast Ratio is defined as the measure of the brightest white to the darkest black and is expressed as the number of shades of gray in between. There are no standards which manufacturer's factories must follow in order to test, or post a figure for such specifications as contrast ratio and grayscale. One argument against such a standard is that manufacturer's will just find a way around it. So for the past several years the thought process of many manufacturers of flat panel technologies is to find creative ways to "test" such specs as contrast ratio in order to post a higher (and thus better) conrast ratio number, presumably to gain competitive advantage over competitors and take market share. 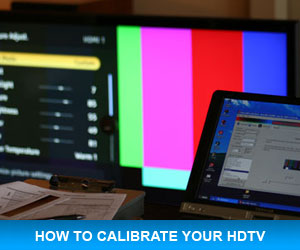 There are several ways that the factories produce these phenomenal contrast ratios. One way is to turn off the display when taking the measurement for black. This of course produces absolute black since there is no light introduced by the display. Another way is to measure white from a small 1 inch white square in the middle of the panel without using the rest of the panel (this can be done at the factory because only certain pixels have to be lit thus concentrating all the power to the one inch area). One more method is to take the darkest and lightest figure before installation of the top protective layer of glass. I have spoken with several manufacturers that have confirmed these methods of "testing" for contrast ratio.

To generate a realistic contrast ratio, I first calibrate the plasma or LCD to D6500K or thereabouts. Then I test the black and white on an ANSI checkerboard pattern that shows both the white and black squares side by side on the same screen. The two must be tested simultaneously with no adjustments in between. Even when testing in our facility, if wanted to inflate my contrast figures all I have to do is turn the picture or contrast setting on the TV all the way to max contrast. Then I can turn the brightness setting all the way down to test black and all the way up to test white. If I'm testing an LCD I can further juice the contrast ratio by decreasing the backlight to 0 for black testing and max it out for white testing. All of these techniques are employable but irrelevant to the end user. There is no correlation between the contrast ratio given as a manufacturer's specification and the actual contrast that the user receives when viewing his or her TV.

This stated, contrast ratios for plasma and LCD TVs have increased very well over the past few years. What I look for most in a picture is great black levels while not losing dark matter detail (i.e. the shading and wrinkling of a black coat). Extremely juiced white brightness doesn't do much for you in your living room, but it does help LCDs look better on the showroom floor.

Generally, plasma TVs have better black levels because there is no backlight (that must be blocked to produce black). Each pixel produces it's own light. For this reason as well, plasma TVs do not get as bright as LCDs (since there is no backlight). That small pixel with its contained phosphor and connected electrode must produce the brightness. LCD's have used the backlighting to increase contrast by increasing brightness. LCD TVs often suffer from hazy, washed out blacks, especially when viewed from an angle greater than 30° off center.