[an error occurred while processing this directive] TV Wall Mount: Mounting your Flat Panel TV on the Wall

More and more people are moving from a tv stand to a tv wall mount. Modern flat panel televisions look fantastic hanging on the wall and with the many types of mounts available you should be able to find one for any room. Below are the different kinds of tv wall mount to choose from. 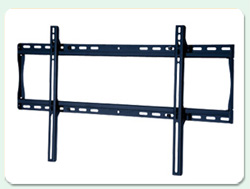 This is the simplest wall mounting solution. Flat wall mounts normally consist of two pieces. One attaches to the TV and one attaches to the wall. The TV is then slid onto the mount from the top and is held securely close to the wall. The only concerns are stud placement in your walls and top clearance so the TV can be lifted above it's final position and slid down onto the mount. 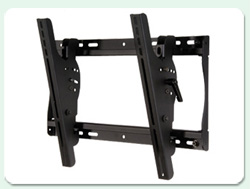 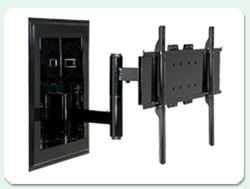 The most versitile and most expensive wall mounting solution is an articulating mount. These usally consist of one or more arms with any number of moveable joints and a tilting mechanism at the and of the arm(s). These are useful when the TV needs to be able to be moved to view at multiple angles or when the best area for wall mounting the TV isn't where you want to watch the TV, such as having the TV in a corner. 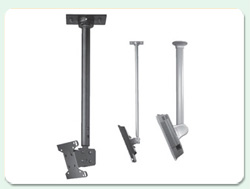 Not exactly a wall mount but it still gets your TV up off the stand, a ceiling mount is a good choice if you want to mount the TV in corner or open area. Typically they are used in commercial applications but some people have found good uses for them in the home. Ceilng mounts are usually a single or dual pole design and can include 360° swivel and tilt capability. 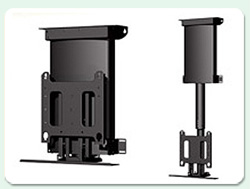 The most expensive mounting solution is a lift, these mounts are usually motorized and hide the TV away in the ceiling when not in use. There are typically two designs, a folding lift and a vertical lift(pictured). A vertical lift raises and lowers the TV vertically and is the better choice for heavier TVs while the folding lift rotates up into the ceiling so the TV is held horizontally when not in use. The folding style is useful in situations where there isn't clearance to lift the entire TV vertically into the ceiling.