[an error occurred while processing this directive] LED TV. Is it worth it? 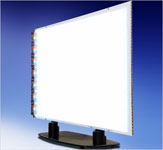 LED TVs are really LCD Televisions with an LED backlight. There have been many quality improvements lately with this technology. Generally though, the better the technology the more it costs. Samsung and Sony are two of the leaders in LED backlit LCDs. Their technologies vary in quality and price.

Generally speaking LED TVs with discreet LED backlighting (also called local dimming) perform better from a viewing angle and black level standpoint than those without. Edge lit LED TV backlighting does not achieve nearly as good a result but still has a slim cabinet. Prices for the local dimming discreet option may be $1000 more per same size level.

So how does LED TV pricing compare to traditional LCDs? Price increases for the edge lit LED backlighting increases the price by $1000 per size. Then for local dimming LED backlighting you need to add another $1200. So $2200 increase from LCD staple to LED top end. And that's just for a 46".

So the better question to summarize this article is: Why not buy the plasma?