LED TV is a bit of a misnomer but as manufacturers and retailers continue to use the term, it makes it's way into the public conscience and is worth deliberating on the differences. LED televisions are really just LCD televisions that use LED lights for back lighting instead of the flourescent CFL lighting traditionally used for LCDs. Both employ the liquid crystal diode (LCD) technology front panel containing the “twisting crystals” which define LCD technology. 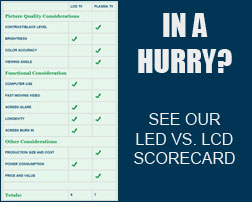 LED TVs feature two main forms of back lighting, edge lighting and local dimming. Edge lighting has LEDs around the edge of the panel and this allows for extremely thin construction. Lately, through advancements in LED (light emitting diode) technology these lights can be manufactured in very small sizes so even local dimming back lighting LED TVs can have a very thin depth. Local dimming backlighting features banks of LED lights behind the panel and these banks can be controlled to lower the amount of back lighting in dark areas of the screen and raise it in bright areas for higher contrast and better blacks. This is accomplished through varying features options in the TV. One recent example had an option to turn the local dimming option on or off. We did notice an improvement in black levels with the feature on.

LCD panels create dark tones by blocking the backlight passing through the panel, this method of displaying black has been a problem inherent in the technology. Local dimming LED back lighting presents a solution to this problem by dimming the back light in areas where the screen should be dark. Edge lit LED will have brighter whites than most flourescent back lit LCDs but do not have the control over the backlighting like local dimming TVs do. 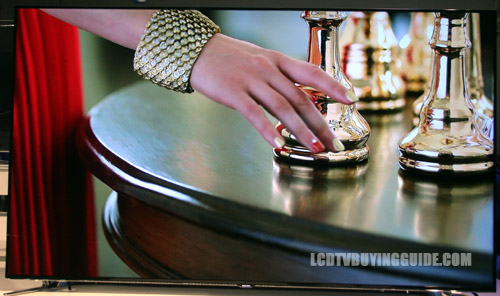 The Samsung UN55F7100 has excellent color rendition and picture clarity. Great contrast levels are also highlighted in this shot

This comparison has become muddied lately with some LCD TVs showing very concentrated black levels. Local dimming LED TVs have been the best in the past.

With white LED backlights the difference between the two technologies isn't very significant, but with RGB colored lights or a color wheel to affect the backlight color the LED TVs have an advantage in displaying realistic color. 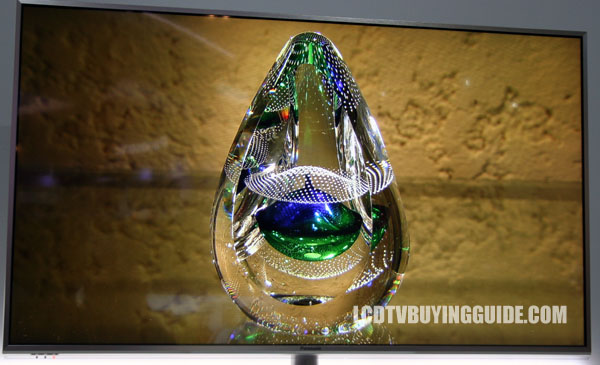 We were very impressed by the sharpness and detail seen in this image. Lines are clean and you can see every bit of light reflecting off the glass

Answers to this question will change frequently. What seems to have the greatest impact now on the viewing angle topic is the quality of the clear glass panel on the front of either LCDs or LED TVs. The thicker, and higher quality this glass panel, the better the viewing angle and somewhat detrimentally the worse the glare. Anti glare technologies do prevent glare but the inhibit picture depth and viewing angles. Lately we have viewed some LCD TVs with very good viewing angles and picture depth though this was never previously the case. We have also viewed very expensive thin edge lit LED TVs with poor viewing angles showing contrast and black level degradation at a mere 30 degrees off center.

Local dimming LED TVs will naturally perform better with the light coming from directly behind the screen.

ADVANTAGE: Local dimming LED TV, then LCD TV, then Edge Lit LED TV. The big variable in all 3 is the quality of the front glass panel which adds depth, good viewing angles and glare. Anti glare screens will always have less depth and poorer viewing angles.

Displaying fast moving video is a function of the response time and refresh rate in LCD and LED televisions. The type of backlighting in the TV has no effect on the reproduction of fast moving video. You will want to compare response times and refresh rates when making a purchase decision. The new 120Hz, 240Hz, and 480Hz rate features all act about the same in our experience depending more on the manufacturer than the stated Hz rate in effectiveness.

The Sony KDL-55W900A utilizes 960 Motionflow Processing that removes stuttering judder from the picture during slow panning side to side scenes while also reducing any blur caused by fast motion.

The biggest difference here will be unrelated to the technology employed and more dependent upon whether or not the TV has a gaming mode that cuts down on the amount of picture processing in the TV. Without the game mode there can be significant input lag with the TV processing not able to keep up with the speed of the game. One slight advantage that LED TVs might have here is that LED TVs have higher feature sets due to their higher costs and therefore will more often include the Game mode.

Most manufacturers are claiming approximately 100,000 hours lifetime for their televisions. LED backlit televisions are brand new and don't have much of a track record but LED lights are typically long lived. Fluorescent CFL backlighting, while lasting a long time will naturally have white balance color changes as the fluorescent lighting ages. CFL fluorescent backlighting will be more unstable. This will degrade the color accuracy and rendition of the TV.

ADVANTAGE: LED televisions do not have much history.

Next Page
(See Price and Value Category and The Final Scoreboard)