Following are highlights from each manufacturer of LCD televisons about what direction they are taking with TV production in 2008, 2009 and beyond:

Samsung Displayed an 82” LCD prototype Quad IT with 3840 X 2160 resolution. The LCD is ultra slim 1” in depth. No pricing or available yet.

Samsungs 7 series LCD line will be the top of the line in 2008 and will have USB available slot, the super clear 2 panel, touch of color technology, and RS 232. As well the it will have 120hz and DNLA. The companies dual commitment to both LCD and Plasma was evident in their extensive lineup. 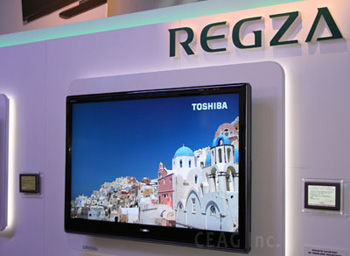 Toshiba also had a nice line of LCD television offerings. The highlight was the XF55OU series with a .9” wide bezel (however the unit was over 4.5” deep). Other features were 1080p, 1.3 HDMI input. Toshiba will not manufacture plasma for 2008, instead focusing on LCD. 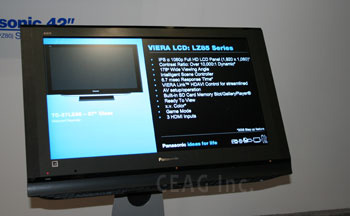 Panasonic displayed some smaller LCD televisions. One such model was the 37LZ800. 37” is the largest size LCD Panasonic will offer in 2008 as the company remains focused on its plasma lineup. Panasonic showed a 150” plasma prototype, which they predicted actual production and ship dates on. 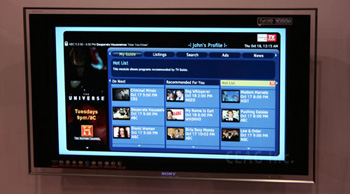 Sony showed several new lines of LCD TVs, but had lots of their current lineup on display such as the XBR4 series. The company seems focused on alternative technologies such as OLED TVs, the Sony Reader (electronic book), Blu Ray, and of course, Playstation. 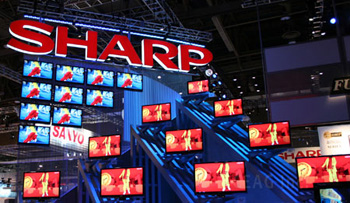 Sharp had a large display of LCD televisions focusing on their new lines. A Sharp representative claimed a 27,000:1 contrast ratio for their LC-65SE94U LCD television. Sharp has been and will continue to ship its 65” LCDs. There was also an 108” prototype LCD which means little since this unit is not scheduled for production. 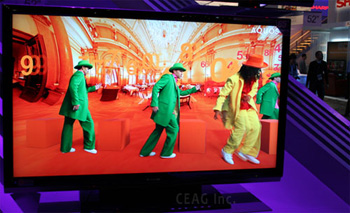 Overall the Sharp display seemed lackluster in presentation and new product. Sharp did not have any super thin LCD TVs on display – not even in prototype. 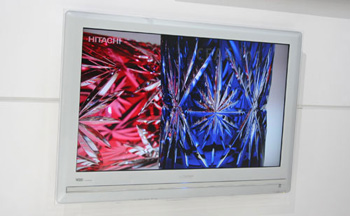 Hitachi was the only company that I visited which claims an actual ship date of 2008 for their super thin LCD technology. The LCD UT37X902 produced also in 42”, 37”, and 32” sizes, will be shipping in April of 2008 according to a Hitachi representative. The LCD is an astounding 1.5” in depth. There were other super thin LCDs, which were much thinner, even below an inch but none had ship dates or production time lines. Hitachi’s largest LCD TV offering for 2008 will be 42”. 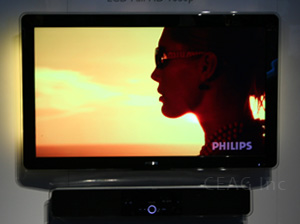 Philips announce its new 7600 series LCDs at the CES show which have new HD natural motion technology as well as a new design with a seamless clear acrylic bezel, and a clean look. The speakers are hidden behind the screen. A company spokesman that I interviewed claimed a 120hz refresh rate and 2 millisecond response rate time. The is the lowest figure anyone claimed at the show. The 7600 series also has dual 15w speakers. 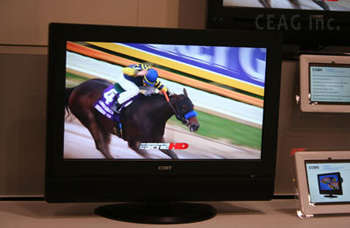 The largest LCD produced by Coby for 2008 will be 32”. LCD television does not appear a huge priority for Coby. The televisions were very mediocre in appearance and quality. 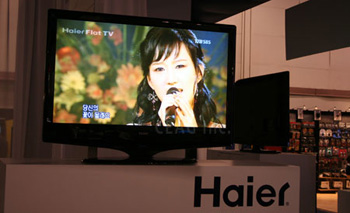 This huge Chinese manufacturer had a nice display at CES. The focus was 120hz LCDs in 3 sizes 42”, 47”, and 52”. A company spokesperson commented that Haier does not manufacture the panel for their LCD TVs rather outsourcing from other Chinese or Korean companies. 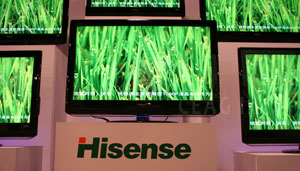 Hisense is an OEM (original equipment manufacturer) for several brands such as Insignia which is sold at WalMart and Best Buy. The company also manufactures for Costco. There were old and new designs of LCDs on display and overall the quality looked suspect. 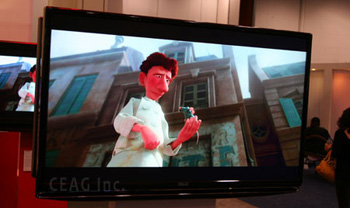 RCA was displayed next to the OEM manufacturer of its displays ACL and Taiwanese manufacturer.