The Magnavox 32MF231D LCD television is representative of the growing number "off brand" 2nd or 3rd tier LCDs that have graced the shelves, but confused the picture of discount retailers and promotions of e-tailers. These LCDs are typically made in China, or sometimes Thailand. Consumers may relate the Magnavox name with its former parent company, Philips, but the current day Magnavox name licensed and has no relation to Philips anymore. The Magnavox product is currently being produced in China.

Our reviewers were anxious to review the 32MF231D to grade its picture quality against the best LCD televisions from Sharp, Sony and Samsung to see whether it does indeed merit a "value" rating or if it should simply be designated as "cheap."

Out-of-the box the picture of the Magnavox 32MF231D is set like most others – artificially bright. To regulate this, the I went into the user menu to change the picture setting. To my surprise, the Magnavox 32MF231D has six picture modes: Personal, Rich, Natural, Soft, Multimedia, and Echo. The initial setting was Rich, which can be compared to the "Vivid" setting on most other brands. I quickly changed it to Natural for our initial inspection. While this improved the color reproduction, the white balance on the Magnavox 32MF231D was still heavily pushed to the blue side. 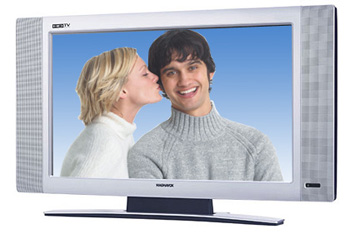 Unfortunately, I was unable to calibrate the Magnavox 32MF231D to near D6500K. Because of the Contrast setting irregularity, I could only calibrate the television to around D9000K. While this is an improvement to the out-of-the-box settings, it does not match the potential of top-tier brand LCD televisions to deliver a realistic picture with correct color saturation. The following table contains the picture settings for the 32MF231D after its ISF-calibration. Although it is not a perfect calibration, using the below settings to regulate the color temperature and white balance "optimizes" the picture quality for the 32MF231D:

Like all LCD televisions, the black levels on the Magnavox 32MF231D do not reach plasma television standards, but they are respectable. Using black and white checkerboard patterns, I then tested true contrast to 300:1, which is on the low side of average for newer LCD flat-panel televisions. On a more positive note, the Magnavox 32MF231D's screen did a good job combating glare. Based on a visual inspection, the viewing angle for the 32MF231D was average for an LCD television – around 110 degrees before the contrast significantly degraded.

The reproduction of high-definition video on the 32MF231D is acceptable – HDTV newbies will likely be impressed, but more advanced users will notice motion artifacts in fast-moving scenes. The 1366x768 resolution is plenty sufficient for a 32" screen, but this positive attribute is outweighed by the false contouring effects and pixelation in the imaging with the 32MF231D. Using our reference Toshiba HD-XA1 and the Lord of the Rings DVD through the HDMI connection on the 32MF231D, we noticed false contouring (banding effects in dark matter) and pixelation in several key scenes. Since LOTR is primarily a digital movie, these are problems that caught our attention. Upper-tier LCD televisions have overcome the pixelation problem by developing faster response times (up to 6ms). While Magnavox does not publish the response time for the 32MF231D, it is clearly inferior. Standard-definition programming on the 32MF231D is acceptable on this television because of our higher forgiveness for pixelation on SD broadcasts.

The aesthetics of the Magnavox 32MF231D are on-par with other entry-level LCD televisions. It has completely silver casing and integrated silver side speakers. One might say that the 32MF231D has a "plastic" look to it, but this is common at this price-point. Because the speakers are side-mounted, some consumers find it difficult to place the 32MF231D in places where size is a limiting factor.

The Magnavox 32MF231D includes an HDMI input to support newer generation DVD players. The television has two component video inputs, three composite inputs, and two S-Video inputs. We would have liked to see another HDMI input as television makers are including more because of increased demand, but we are happy with one at this price-point. One glaring omission with regards to inputs on the 32MF231D is a PC input. An LCD television at this size should be equipped to handle a computer signal, as many consumers buy LCD flat-panels to pull double-duty as a PC monitor or video gaming monitor.

The on-screen menu system on the 32MF231D is confusing at first, but manageable. It takes up the whole screen, so one cannot adjust the settings without missing part of a television program. The Picture settings include the normal adjustments, but there are six preset picture modes which Magnavox calls Smart Picture Settings: Personal, Rich, Natural, Soft, Multimedia, and Echo. Deciding between these presets can be confusing, and unfortunately only Personal mode is adjustable.

The remote control is small, but it has good ergonomics. There are no direct-input buttons, so A/V sources have to be toggled until the desired input is reached. The LCD screen has an Automatic Aspect Ratio setting, but it does a poor job at "guessing" the input signal. When we watched a widescreen movie, the automatic setting would always cut off part of the picture. Instead we used the Wide setting for most viewing.

The speakers of the Magnavox 32MF231D are a glaring weakness. Compared to its LCD television competition, the power output is especially weak – 2 x 5 watts. This is half of the output of the 32" Sharp LCD television, the Sharp LC-32D40U. Most users will want to use speaker systems to lighten the load on the television's speakers.

The Magnavox 32MF231D, sells for $800 to $900. Compare that to the 32" LCD televisions from top-tier manufacturers, Sharp, Sony and Samsung, that cost approximately $350 more and it seems a decent deal. But a poor performer is a poor performer, no matter what the price. In my opinion, it is better to spend a little more money for a higher quality product that will last longer, with less trouble and bring a top notch picture. There are discount off brand models in the marketplace that have decent quality and picture ratings, but in my opinion from this review experience, the Magnavox 32MF231D is not in that mix.