As Sony left the plasma television market last year due to lack of control in its plasma panel production, many speculated that the home electronics juggernaut would forever lose its High Definition flat-panel television market share. Shortly thereafter, Sony entered a strategic partnership, S-LCD, with the Samsung Corporation to develop their 7th generation LCD panels in Tangjeong, South Korea. The KDL-46S2000 is the flagship of Sony's recently-released Bravia S Series flat-panel LCD television line even though it does not have Sony's stellar XBR video processing included. This first generation model is also the largest LCD TV panel produced to date by Sony and tops Sharp's 45" LCD by a diagonal inch. Sony's aggressive marketing and quality emphasis of its Bravia line has placed the company in the number 1 market share position for LCD televisions in 2006 and the primary competition for Sharp and Samsung in the LCD Flat-panel television market.

Although the KDL-46S2000's initial Picture Mode is set to Vivid, which artificially brightens the picture, we were very overwhelmed with the overblown bright colors and rich display of the newest Sony LCD TV. Once we changed the Picture Mode to Standard to improve the standard settings, a very quick adjustment, we were more impressed with the color reproduction accuracy of the KDL-46S2000. On the other hand, like most LCD televisions, the initial assessment of the KDL-46S2000's black levels left much to be desired. The dark parts of the picture were displayed too brightly, and much of the dark detail was lost. We lowered the power of the LCD backlight bulb in the Picture Settings menu which helped to alleviate the problem. 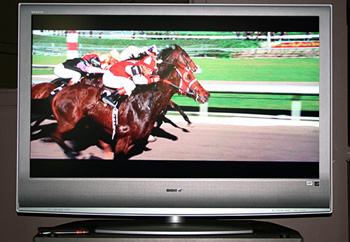 To get the best picture possible of our KDL-46S2000, we professionally calibrated the display using Imaging Science Foundation (ISF) standards. We used a colorimeter, a Sencore High-Definition signal generator, and a specialized software suite to calibrate the television to the film and broadcast industry standard color temperature of D6500K. With this equipment we were able to measure color temperature, color saturation, white balance, and black levels. Using these measurements as a reference point, we then calibrated to optimal picture settings for the KDL-46S2000.

The following table contains optimal picture settings for the KDL-46S2000 after our professional calibration. We highly suggest that, if you own a Sony KDL-46S2000, you imitate these picture settings. By configuring the television to the below settings we were able to get the color temperature to D6350K, which is a substantial improvement in quality over the out-of-the-box Picture Settings. Using the below settings to regulate the color temperature and white balance virtually perfects the picture of the KDL-46S2000:


* Backlight should be adjusted to compensate for the brightness of your viewing area.
Remember that using a Backlight setting that is too high will shorten the lifespan of your television's backlight bulb.

These Picture Settings set the KDL-46S2000's just off-center of D6500K—it is somewhat "minus-blue"—the greens and reds in the picture slightly dominate the blues. To correct this issue and move any closer to D6500K would require a lot of time, effort and money through adjustment of the difficult service menu and for only a marginal gain in picture quality.

Notice that we left all of the options in the Advanced Settings sub-menu of Picture Settings turned off. These settings use computer algorithms to artificially improve the picture quality. These are mostly outdated technologies left over from CRT and do very little to help the overall picture quality if you set the user-defined Picture Settings correctly.

Once the calibration is complete, one can easily tell that the picture on the KDL-46S2000 is much improved. The black levels are deeper, and dark details are much easier to distinguish. The color reproduction in the racing scenes in our Seabiscuit DVD (upconverted to 1080i on the Toshiba HD-XA1) is outstanding. Prior to the calibration, the dirt on the racing track appeared very reddish and flesh tones on the jockeys were heavily exaggerated. After calibration, the KDL-46S2000's picture is so realistic that you actually feel like you are racing alongside Seabiscuit!

True measured contrast ratio (light output ratio of "whitest white" to the "blackest black") using a checkerboard pattern was approximately 700:1—which is excellent for an LCD TV—but of course falls short of Sony's advertised contrast ratio of 1300:1. The contrast ratio of the KDL-46S2000 is visibly quite good, but it doesn't match the top-tier plasma televisions available today due to deeper black levels in good plasma TVs.

The Sony KDL-46S2000 handles high-definition content with ease. It masterfully displayed even the most minute details with our HD-DVD player, the Toshiba HD-XA1, and HDTV Over-the-Air antenna. Every movie we tested was crisp and without any noticeable pixilation. The KDL-46S2000 can adequately display a Standard Definition (480i) image, but some graininess and pixilation is noticeable. These problems could possibly be attributed to the input source. Gamers and those who need a big display for computer applications will be impressed—Sony improves the response time to 8 ms for the Bravia S Series – quick enough to eliminate virtually all motion artifacts!

Sony's anti-glare screen is among the best in the industry. Even with direct sunlight, there was very little noticeable image degradation. The viewing angle of the KDL-46S2000 is improved over previous generation Sony LCD TV's, but it does not match Sony's advertised 178° viewing angle. The horizontal viewing angle is quite good—up to about 160°—but image quality quickly deteriorates at vertical angles (above and below) harsher than 15° above or below eye level.

Overall, though I prefer deeper black levels in a picture I was very pleased with the quick response rate time, the stunning beautiful color, and the brightness of this LCD.

The KDL-46S2000 swivels left or right up to 15° on its accompanying silver pedestal stand. The inclusion of a swiveling pedestal stand is a clever feature considering the inherent viewing angle problems that come with LCD TV's.

The built-in speakers on the KDL-46S2000 are quite impressive for a flat-panel television. With Sony's SRS® TruSurround XT audio enhancement, the speakers more than fill our medium-sized viewing area. Because of its size, most people will use the large KDL-46S2000 for their primary home theater display, and audiophiles will probably opt to use their own surround sound systems.

The KDL-46S2000 comes with a host of inputs, but it only has one HDMI input—not enough by today's standards! Included on the back of the panel are 2 composite, 1 S-Video, 2 component video, 1 15-pin VGA PC, and one HDMI input. There is also a side-panel composite/S-Video input. While most people would like at least two HDMI inputs these days, the KDL-46S2000 does have a VGA input which can pull double-duty as a component input when using the correct cables. Another issue with the inputs is how Sony chooses to display them on the Input Menu on the television. Unlike most televisions today, the inputs are not labeled by type—Component 1, Component 2, HDMI, etc.—they are labeled in a way which is much more difficult to comprehend—Input 1, Input 2, Input 3, … Input 7. Although the KDL-46S2000 allows you to rename the inputs on the menu, it is nearly impossible to remember which input is which in the default setting.

Like most Sony televisions, the remote control included with the KDL-46S2000 is very simple and easy to use. It is an appropriate size, and every button is big, clearly-marked, and logically placed. The Volume +/- and Channel +/- buttons are quite big and easy to adjust without looking. Sony even includes a small raised point on the Channel button so that one can decipher the two without looking at the remote. Universal remote control function is not included, but I believe that Sony did so consciously to make the remote control easier to use.

Like the remote control, the on-screen menu system of the KDL-46S2000 is intuitively laid out and easy to use. When you hit the big blue Menu button on the remote control, the menu's main options—External Inputs, Analog Favorites, Digital Favorites, Analog, Digital, and Settings—are displayed. The External Inputs tab allows the user to rename the horribly named Inputs 1-7 according to their use. The Analog Favorites and Digital Favorites menu options allow the user to program favorite channels from the analog (NTSC) and digital (ATSC) tuners. The Analog and Digital options take the user straight to the analog and digital tuners, respectively. The Settings sub-menu includes settings for Picture, Sound, Screen, Setup, PC Settings, Analog setup, and Digital setup. The Picture settings can be adjusted for each input independently or all together. This feature is especially helpful when you have many different input selections which affect the television's picture in different ways. The Screen submenu allows the user to change the aspect ratio of either the current input or all inputs. The other Settings menus offer few useful adjustments. The intuitive menu system and user-friendly remote control are Sony hallmarks which are certain to please every user of the KDL-46S2000.

Even though the KDL-46S2000 is very large for an LCD TV, it has relatively slim dimensions—only 44 1/8" wide! For comparison's sake, this is roughly the width of some 42" plasma televisions. Therefore, if you are trying to maximize the size of your television's screen for the amount of space you have, the KDL-46S2000 is a good one to consider. The KDL-46S2000 is stingy in its power consumption as well—it only consumes 120 W of power. This is less than most comparably-sized LCD TV's and about half of the power consumption of a comparably-sized plasma television.

The Sony KDL-46S2000 has an impressive picture, many useful features, and style. Sony lists its MSRP at $3,499, but our favorite authorized dealers on the internet are selling this unit around $3,000. Not surprisingly, the KDL-46S2000 was selling for several hundred dollars more at the big box retail stores in our area. In fact, many of these stores did not have this television in stock.

The price is still a bit higher than its chief competitor, the Sharp LC-45D40U. This price discrepancy can be attributed to Sony's usual brand-name premium and resounding buyer loyalty. Overall, this is a fun, reliable, bright and colorful product with great aesthetics.

Comparison with plasma is difficult due to size discrepancy. A 42" plasma with similar features from Panasonic or Samsung sells for around $2300. A 50" plasma with deeper black levels but higher power consumption from a top tier manufacturer will sell for around the same price as this Sony LCD.