Besides looking cool and oh-so futuristic in your living room, what are the advantages of owning an LCD or LED LCD Flat Screen Television?

It's easier to watch. Flat screen TVs like LCDs, LED LCDs and Plasmas are significantly brighter and feature higher contrasts than traditional CRT sets. Which means that an LCD TV will perform exceedingly well under most ambient light conditions. With LCD TV viewing a brightly lit room won't wash out its picture, nor will lamplight cause a glare on your television screen. The beauty of these flat screens is that you don't have to turn out the lights to see the image clearly and easily. Nor do you have to worry about eyestrain, since neither LCDs nor Plasmas flicker the way old-fashioned TVs do. 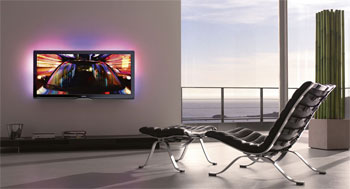 And, you can watch TV from almost anywhere in a room since flat-screen LCD television displays can have up to a 160° viewing angle, which means your TV will look good when viewed from any point 80° in either direction from the center of the display.

One issue affecting the overall quality of the picture reproduced on LCD and LED LCD TVs has to do with dot pitch. This term refers to the distance between subpixels of the same color in adjoining pixel triads. The closer these "dots" are to one another, the sharper the resolution will be. This is especially true when displaying computer signal images and graphs. And the picture in front of you will be more realistic and detailed. Higher dot pitches also increase the viewing angles of LCD panels. Since dot pitch is measure in millimeters (mm), a good rule of thumb is this: Smaller dot pitches make for sharper images. You generally want a dot pitch of .28mm [" 10,000 pixels/in2 of your display] or finer.

Note: Plasma TV displays have long been touted as having wider viewing angles than comparably sized LCD TVs. But recent improvements in quality have made LCD televisions (especially those with LED backlighting have made them nearly comparable to Plasma TVs with respect to their viewing angles. According to Sharp, a leading manufacturer of LCDs, the newest generation of LCD displays have just as good viewing angles as plasma sets, but this is only true of the better brands. In any event, even the best LCD monitors have yet to achieve the breadth of viewing angles found on typical Plasma monitors.

The picture is smooth, colorful, and (best of all) wide. LCD and LED Flat Screen TVs have none of those annoying scan lines that conventional sets do. This owes to the fact that each subpixel has its own transistor electrode, which creates smooth, evenly lit images across the entire surface of the display. It also enables these displays to reproduce images that are saturated with color. [256 shades of red x 256 shades of green x 256 shades of blue " 16.8 million different colors!]

Recent advances in LCD technology have markedly increased the response time of these displays, resulting in even smoother on-screen presentations. There have also been recent increases in the refresh rate as one of the latest advancements to 120Hz and 240Hz and a manipulated 240Hz to form 480Hz. These frame rate increases help get rid of motion blur for fast action scenes. For more on this topic see our article titled 120Hz, 240Hz What does it mean? One way to think about response time is in terms of the amount of time it takes a pixel to "refresh" itself-i.e., to go from being active to being inactive, which is to say, ready to be re-activated). Response time is measured in milliseconds (ms), with the best LCD monitors now clocking in with response times under 20ms. Slower response times (>20ms) can cause the image on the panel to lag and appear jerky, an effect known as "streaking" or "trailing." Another phenomenon associated with slower response times is "ghosting." This occurs when the display is made to switch quickly from light to dark states (or vice-versa). In these instances, on-screen images may appear to stay on the screen belatedly.

LCD displays come either with a 16:9 aspect ratio (i.e., 16 units wide to 9 units high), the proper one for viewing HDTV and for watching DVDs, or with a 4:3 aspect ratio, the norm for most broadcast television shows. If you opt to go with a widescreen (16:9) display, does this mean that you'll have to watch some shows where the image is distorted or stretched unnaturally? No. When displaying a "normal" or 4:3 picture image from satellite, VCR, or cable TV, the image can be viewed in a number of ways-in its original format (with black or gray bars on the sides of the screen), or in "full" mode (where the image is converted or "stretched" using specially designed algorithms to reduce the visible stretch marks as much as possible). Again, the quality of the picture produced under such circumstances depends largely on the quality of the television with which you scale-up 4:3 pictures or scale-down 16:9 ones. Nevertheless, this is only a temporary dilemma: Since HDTV is shown in widescreen, this is the format of the future for much of broadcast television.

The display is multi-functional and long-lived. An LCD is a television monitor, capable of displaying HDTV, regular TV, and home video. It's also a computer monitor. In fact, it can accept any video format. LCD TVs typically include inputs for (a) HDMI, (b) S-video and component video, and (c) one or more RGB 15 pin computer input, USB, and other  inputs from a computer. Because of the high resolution of LCDs, text and graphics look especially sharp when viewed on them, which makes them the best solution for displaying data and web-based content.

Note: Some LCDs (including many by Sharp) do not come with RGB inputs. If you plan to utilize your LCD display as a computer monitor, be sure to check out the specs of the unit you're thinking of purchasing.

You can expect to use your LCD TV in many capacities for many years: The average lifespan of one of these displays is 60,000 hours. If watching TV was your full-time job, and you did it 24 hours a day, it would take you almost 7 years to wear out your LCD display. With more normal viewing habits of, say, 8 hours per day, you can extend the lifespan of your TV by a decade or more (to about 20 years)!

Note: The lifespan of an LCD display is generally longer than that of similar-sized plasma displays. Some manufacturers claim that their LCDs can last upwards of 80,000 hours when used continuously under controlled conditions (e.g., in a room with "standard" lighting conditions and 77° temperatures throughout). Just how realistic such claims are is debatable. After all, whose living room has no windows and remains at a perfectly comfortable 77 degrees year-round?

A more immediate concern is the actual lifespan of the light source in your LCD or LCD LED Flat Screen Television. This is perhaps THE critical component of your display unit. It is particularly important for maintaining a proper white balance on your TV. As these florescent bulbs age, colors can become unbalanced, which could result in too much red, for example, in your picture. So, it pays to buy name-brand displays. You will definitely pay more for better LCD display brands like Sharp, Toshiba, JVC, or Sony than you will for cheap Chinese or Korean variety knock-offs, but you'll get a backlighting bulb of higher quality and, in the end, a TV whose colors will stay truer longer.

In some cases, the warranty for this particular feature can be shorter than for the display as a whole. This means you might have to buy a new LCD TV because the coverage on its backlight has expired. Moreover, some bulbs can be replaced, while others are built in to the unit itself. You should definitely do some research on the backlighting system, how it's configured, and how it's warranted.

8 steps to buying an LCD TV


[an error occurred while processing this directive]