[an error occurred while processing this directive] Best Home Office TV: Our Top Recommended Televisions for your Home Office 2014

Our Top Recommended TVs for your Home Office

We chose the below televisions for your home office based on dual use functionality. All of the below TVs function just as well as a PC monitor as they do as a television. Various sizes are recommended from a 22" for your desktop to a 46" that can be used for presentations or for keeping up with the news or the game while you're working.

Samsung's 2011 4 Series LCDs are a step up from the 3 series. Available in the same sizes they still feature a 60Hz, 720p, CFL backlit panel, with SRS TruSurround HD. They add a third HDMI input, the ability to watch video off a USB thumb drive and Samsung's AnyNet+ which allows communication between similarly equipped Samsung home theater equipment.

The LD-2655VX is focused on energy efficiency, the ad campaigns for the television promote that it uses less energy than a 100 Watt light bulb. The 42" is LED edge-lit and features a 1080p, 120Hz panel. The 26" size is great for those looking for a little larger kitchen TV.

You'll be surprised at the big, bold colors that this 26" LCD HDTV delivers. Its images are lifelike and crystal clear. The picture quality is sharp. And action scenes look like they should--with smooth motion. The classic black bezel also has a new twist--the bottom bezel and neck are transparent, creating a more modern look. Enjoy your favorite movies and TV shows in bright, vivid color with this SAMSUNG LCD HTDV.

The UN32D6000 presents an interesting spectacle in the 32-inch market. It will not be the most price competitive TV but will offer a superb picture for HD programming for those wanting a very sleek small TV. The D6000 represents a mid tier unit in Samsung's lineup but the 32D6000 is one of the top tier Samsung 32" TVs available.

Everyone is on the the latest and greatest 3D TVs and LED TVs, but dont underestimate some of these excellent little LCD TVs for delivering the best value (along with plasma) in the marketplace. From past reviews and viewing at CES we know that this TV has a strong picture performance at a value oriented price.

One growing picture trait of the Sony LED TVs that sets it apart from the competition is the colors are not oversaturated. In fact, for an edge lit LED backlit LCD TV they are somewhat subdued. I like the color accuracy emphasis of the newer Sony TV genre and that's also true of this edge lit LED Sony KDL-40EX520 a direct replacement for the Sony KDL-40EX500 that we reviewed last fall.

Sony has long touted the processing chip set engines in their TVs. We found the EX500 processing a poor performer. Sony is touting a new processor in the 40EX520 with the X-Reality processing engine (single chip in this model). This chip features some upgraded image enhancement to help improve picture quality and eliminate those nasty motion artifacts we found on the EX500. 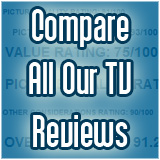